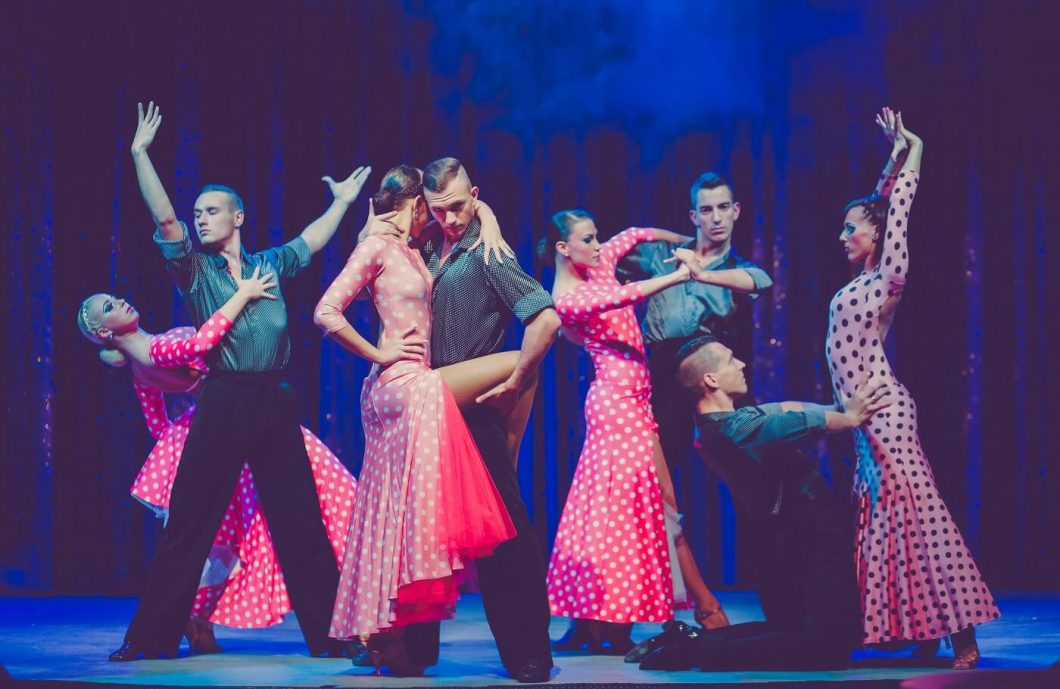 The cha cha cha, is a dance of Cuban origin. It is danced to the music of the same name introduced by Cuban composer and violinist Enrique Jorrin in the early 1950s. This rhythm was developed from the mambo. In 1953, Enrique Jorrin started playing mambo more slowly, followed by the birth of cha cha cha, which was a huge success in dance circles, starting with Cuba and Mexico.

By 1955 the music and dance of the cha-cha-cha had become popular in Latin America, the United States, and Western Europe, following in the footsteps of the mambo, which had been a worldwide craze a few years earlier.

In the competition cha cha cha is the first dance.

Samba is a lively  dance of  Afro-Brazilian origin. It was created by African people in Brazil from the music and dance culture they brought from Africa. Samba reached Brazil through the slave trade, become most popular in Rio de Janeiro and Sao Paulo.

The term samba originally referred to many of several latin duet dances, today is the most prevalent dance form in Brazil. Sambais the height of its importance during the festival of Carnaval.

Ballroom samba, evan more than other ballroom dances is very disconnected from the origins and evolution of the music and dance that gives it its name. Most steps are danced with a slight downward bouncing or dropping action. This action is created through the bending and straightening of the knees, with bending occuring on the beats of 1 and 2, and the straightening occurring between. It is danced to the music in 2/4 or 4/4 time. Samba uses several different rhythmic patterns in its figures. It was included in the competition dances in 1959.

Rhumba,  also known as ballroom rumba, is a genre of ballroom music and dance that appeared in the  East Coast of the United States during the 1930’s across from New York. It combined American big band music with Afro-Cuban rhythms, primarily the son cubano, but also conga and rumba. Although taking its name from the latter, ballroom rumba differs completely from Cuban rumba in both its music and its dance.

It is the most romantic Latin American ballroom dance.  Rumba’s poetic movements are mixed with sensual elements to meaningful Afro-Cuban rhythms. Lush and sexy dance, the woman strives the man with her provicative hip movements. Ballroom rumba was derived from a Cuban rhythm and dance called the bolero-son.

Rumba has joined the program of competitive dances in 1964, as the only slow dance.

Pasodoble is symbolizes the Spanish  bullfights with an intense atmosphere. It can also be emotional and introspective,  as well slow and very dramatic in the same time.

Many pasodoble songs are variations of Espana Cani. The song has breaks or “highlights” in fixed positions in the song. Highlights emphasize music and are more powerful than other parts of the music. Usually, dancers strike a dramatic pose and then hold position until the end of the highlight. Traditionally, pasodoble routines are choreographed to match these highlights, as well as the  music phrases. Accordingly, most ballroom pasodoble tunes are written with similar highlights.

Because of its heavily choreographed tradition, ballroom pasodoble is danced mostly competitively, almost never socially, or without a previously learned routine.

This dance gained popularity in the US in 1930. It was too difficult to achieve widespread popularity. All moves are sharp and quick. Pasodoble takes up a lot of space, limiting it to special occasions.

In competitive dance, modern pasodoble is combined with other four dances (samba, cha cha cha, rumba and jive) under the banner International Latin.

In latin dancing, the jive is a dance style that originated in the United States from African-Americans in the early 1930s. It was popularized in 1934 by Cab Calloway. It is a lively and uninhibited variation of the jitterbug , a form of swing dance, lindy hop and boogie.

Jive is a fast-paced, agile and self-forgetful, yet moderate and cultured version of jitterbug and lindy hop. Glenn Miller introduced his own jive dance in 1938 for the song “Doin’ the Jive ”.American soldiers brought lindy hop and jitterburg to Europe at 1942, where this dance swiftly found a following among the young. In the United States the term Swing became the most common word used to describe the dance, and the term “jive” was adopted in the UK. Variations in technique led to styles such as boogie-woogie and swing boogie, with “jive” gradually emerging as the generic term in the UK.

Jive was considered a forbidden genre during the German occupation, as was swing music itself. After the war, the boogie became the dominant form for popular music. In 1968 jive was adopted as the fifth Latin dance in International competitions. The modern form of ballroom jive in the 1990s–present, is a very happy and boppy dance, the lifting of knees and the bending or rocking of the hips often occurs.

This website uses cookies to improve your experience while you navigate through the website. Out of these cookies, the cookies that are categorized as necessary are stored on your browser as they are essential for the working of basic functionalities of the website. We also use third-party cookies that help us analyze and understand how you use this website. These cookies will be stored in your browser only with your consent. You also have the option to opt-out of these cookies. But opting out of some of these cookies may have an effect on your browsing experience.
Necessary Always Enabled
Necessary cookies are absolutely essential for the website to function properly. This category only includes cookies that ensures basic functionalities and security features of the website. These cookies do not store any personal information.
Non-necessary
Any cookies that may not be particularly necessary for the website to function and is used specifically to collect user personal data via analytics, ads, other embedded contents are termed as non-necessary cookies. It is mandatory to procure user consent prior to running these cookies on your website.
SAVE & ACCEPT